Birmingham youngster Tyrese Nelson has left his mark on the buses after winning a competition promoting safer travel.

The 11-year-old got to name a bus after his baby niece as part of the annual Operation Bale initiative run by the West Midlands Safer Travel Partnership.

Operation Bale is run every September with the start of the new school year and educates children beginning senior school on how to use and behave on public transport.

The competition asked youngsters why they thought it was important to behave while using public transport.

His winning answer was: ‘You should behave on buses because they are not your property to damage.  You should never distract the drivers or cause them any harm and never harass anyone in general’.

Tyrese is a pupil at Perry Beeches The Academy (CORR) in Perry Beeches, Birmingham, and named the National Express West Midlands bus ‘Talasia-Rose’ after his two-year-old niece.

Tyrese, who works on his school’s safer travel team, said: “I want to be a bus driver when I am older so I’m really pleased to have won.”

Inspector Rachel Crump of the Safer Travel police team said: "Tyrese gave a brilliant answer and his attitude towards how you should use public transport is spot-on, he’s a credit to his family and his school.”

This year’s Operation Bale has seen a 20% reduction in ASB on the same period last year.

Officers from the Safer Travel Partnership met with youngsters at bus stations and interchanges across the West Midlands and visited more than 50 schools between September 9 and 16.

They also went on buses with pupils to advise on staying safe whilst travelling, what to do if they do get into difficulties, and highlighting the impact anti-social behaviour (ASB) can have on other passengers.

Three plain clothed operations were held both on bus/tram services and within the bus stations in an attempt to identify students behaving inappropriately.

The team encouraged youngsters and other passengers to use the See Something Say Something service to report ASB anonymously on the bus network.

Passengers can text 'bus' followed by a space and then details of the incident including time, date, location and route number to 83010.

Where perpetrators are identified ASB officers take appropriate action, often in conjunction with a school and parents.

This can an include payback or reparation for their behaviour in the form of cleaning buses and other work via the Restorative Justice scheme. 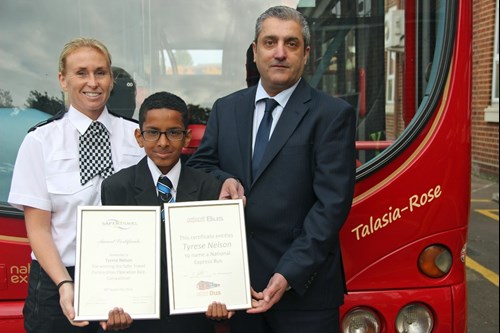