Young people in Birmingham recently got a once-in-a-lifetime chance to trade places with police and fire service officers to help deter them from crime.

A total of 45 young people — some of whom are known to police — spent two days with officers from the Safer Travel Police Team and West Midlands Fire Service.

The young people played the part of police and firefighters who had been called out to deal with disturbances, including a mock ‘riot’. The unique initiative aimed to help deter the youngsters from going on to commit crimes as a result of seeing what the police and fire service have to cope with on the front line.

The youngsters began by learning about key aspects of railway and fire safety to help educate them about the dangers and inform them how to keep safe and out of trouble in the future. They also received education about arson and how the fire service deals with people trapped in road traffic accidents. 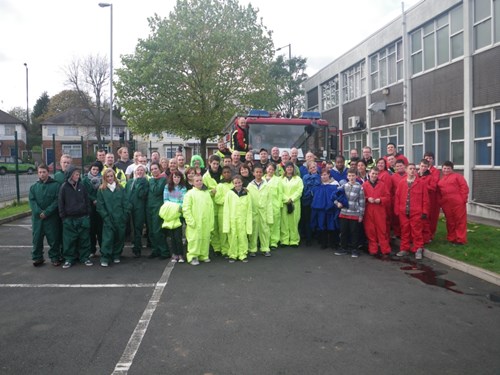 On the second day, roles were reversed and the group put on riot gear and traded places with the officers to play out a number of different scenarios officers might face when policing events involving large crowds.

It took place at the old Selly Oak Hospital building, before moving on to King’s Norton rail depot to be shown some of the dangers the railway environment poses to those who trespass on or near the line.