The Safer Travel Partnership has launched a dedicated team to tackle non-compliance of face masks on public transport.

The multi-agency team, which consists of police constables and police community support officers from Safer Travel as well as staff from National Express and Transport for West Midlands (TfWM), are deployed to bus stations across the region to ensure passengers are wearing face coverings on their journeys unless they are exempt.

Reported compliance levels are continuing to remain high, typically around 90%. Using data provided by TfWM and transport operators, resources can be focussed in priority areas that have recorded lower compliance levels.

The team are continuing to use the four E’s approach to mask covering compliance: engage, explain, encourage and enforce; and figures show that passengers are responding well to initial officer engagement with high numbers of passengers putting on a mask when they’re advised to.

Since the beginning of October when the task force was created, the dedicated team have advised over 5,500 passengers to wear a face covering correctly (covering both the nose and mouth) and have given out approximately 1,300 masks which have been donated by Transport for West Midlands. This does not include people with exemptions, which represent around 14% of passenger engagements, or British Transport Police data.

Safer Travel have also issued six Fixed Penalty Notices (FPNs) of £200 to passengers for refusing to wear a face covering.

Engagement with passengers has been extremely positive, and the majority of interactions have involved giving out simple reminders to passengers. Officers have found that engaging and explaining the legal requirement to wear a face covering has been highly effective and passengers have responded well to the first three E’s, with enforcement in the form of FPNs or arrests often not necessary. 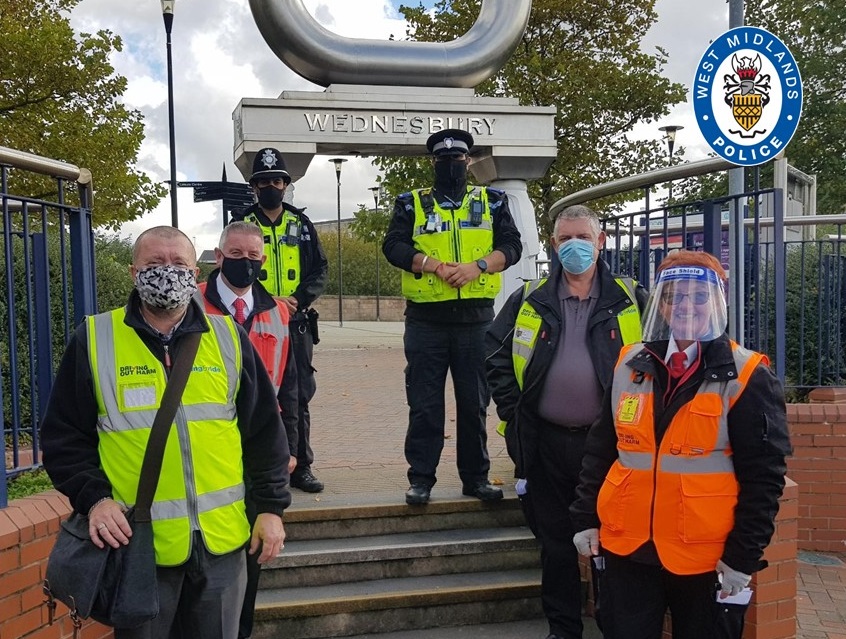 The West Midlands Police and Crime Commissioner, David Jamieson said: “It is vital that people wear their face coverings on public transport to protect themselves, those around them and to help us stop the spread of the virus.

“Our Safer Travel team have been doing excellent work in engaging with people on public transport and reminding people of the rules which are there to keep us all safe. Officers have been able to give out over 1,000 masks to people to as well as offering advice on how to wear them properly.

“The four E’s approach has been successful on the whole, with high levels of compliance, but people do need to remember that officers won’t hesitate to use their enforcement powers, directing people to leave public transport and issue fines if they refuse to comply.”

Andy Street, the Mayor of the West Midlands, said: “The wearing of face coverings on public transport has been compulsory for several months now, and it is great to see compliance as high as 90%. But sadly there continues to be a small minority, as there has been throughout the pandemic, who continue to flout both this and other critical rules, and undo the hard work of the vast majority in trying to drive this virus out of the West Midlands.

“It is therefore only right we now clamp down on this behaviour, and I am pleased that a new taskforce has been established to deal with non-compliance.

“The stricter people follow guidelines such as this, the better chance we have of bringing the local rate of infection down, reducing the pressure on our hospitals, and ultimately having our local restrictions eased.”

National Express have also brought back staff members from furlough specifically to join the task force.

National Express UK Safety Director, Mark Heffernan, said: "Everyone knows now that face coverings must be worn when we're in shops, supermarkets and on public transport, so it's great to see that customers are complying with the rules.

"Our buses continue to run for those that rely on us to get to where they need to be and as part of the Safer Travel partnership we're pleased to be working together to keep everybody safe."

Many key workers are still needing to travel to work using public transport, and Safer Travel are continuing to protect the public from crime and anti-social behaviour across the network throughout the recent CoVID-19 lockdown regulations. Officers have also incorporated face covering compliance checks into their daily patrols across the bus, train and metro network.

The task force uses a small amount of resources to tackle a wide area, and its success over the first month of activity means that they will continue to work across transport hubs in the coming weeks.