The region’s new combined authority has landed a major award after its transport arm was named best in the UK at the industry’s equivalent to the Oscars.

The award highlighted a number of key projects that TfWM had delivered including the Midland Metro tram extension through Birmingham city centre and the Swift smartcard - the most advanced of its kind outside of London. 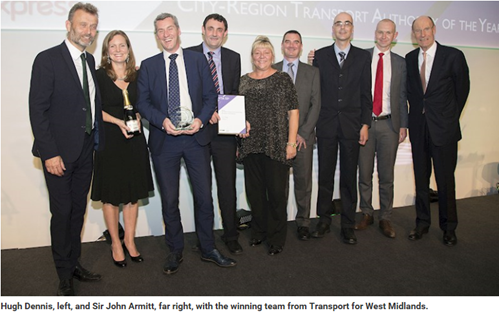 Beating tough opposition from other regions including Greater Manchester, Merseyside and the North East, the award also recognised TfWM’s innovative Bus Alliance which works with bus companies to encourage investment in the network, increase standards and improve bus links.

Cllr Roger Lawrence, transport lead on the WMCA, said: “This is the industry’s most coveted award so it’s a real testament to the hard work and expertise of our staff at TfWM.

“The projects they have delivered are helping to drive economic growth and new jobs right across our region while bringing real benefits to the travelling public.

“But this is just the start and I know that everyone at TfWM is ready to deliver the next tranche of tram extensions, rail improvements and enhanced passenger services.”

The event was compered by TV actor and comic Hugh Dennis and the award was presented by Sir John Armitt, chairman of the National Express group, to TfWM’s managing director Laura Shoaf.

“It’s a tremendous achievement and it marks the start of what will be an exciting time for transport in the West Midlands,” she said.

“Our minds are now focused on putting in place the transport infrastructure needed to reap the maximum economic benefits possible from HS2.

“Our goal is to build a fast and efficient transport network of rail, tram, bus and cycle routes so people can get to the new jobs being created, reach health, education and training facilities and visit leisure destinations.”

TfWM was established when the combined authority was launched in June this year and has built on the foundations left by Centro – the region’s former transport authority.

TfWM has been tasked with delivering the combined authority’s long term transport strategy ‘Movement for Growth’ which will drive forward more than £4 billion of transport infrastructure over the coming decade.

Working through TfWM, the combined authority will prioritise the building of schemes that can best underpin and support its wider goals for economic growth, housing and skills.