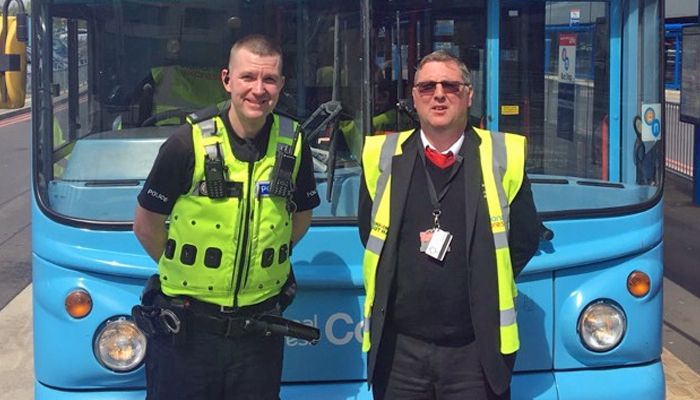 In a first for Coventry, Safer Travel’s PC Sean Murphy and Sean Stenson, an Inspector for National Express, teamed up to work together on a number of National Express Coventry routes across the city.

During the first joint partnership working day in Coventry, they successfully:

While out on patrol, Inspector Stenson also received a phone call from his National Express Coventry Revenue Inspection colleagues, requesting assistance with a group that had been trying to travel without paying the correct fare.

One woman was found to be using somebody else’s travelcard. PC Murphy was able to educate her on what could happen if she was prosecuted for a fraud offence.

A male in the same group had initially tried to provide a false address when being issued with a fine, however PC Murphy intervened and was able to obtain the correct address.

As part of the Safer Travel Partnership, National Express Coventry and officers from the Safer Travel team are working together to tackle crime and anti-social behaviour on the public transport network.

A recent report showed that in 2017/18, bus crime in Coventry has fallen by 18% compared to the previous year.

This is in line with the longer term downward trend, with crime on the wider West Midlands bus network having reduced by approximately 70% in the last 10 years.

Tom Stables, managing director of National Express, said: “Incidents of serious crime on the bus are few and far between but we know that our customers don't want people smoking, swearing and refusing to pay their fares.

“The first day of joint partnership working in Coventry has produced some good results already, which is great news for our customers.

“We’re looking at more dates in the near future, including a day working closely with our two new dedicated Revenue Inspectors who recently started supporting our passengers and services across the city.”

Cllr Roger Lawrence, lead member for transport for the WMCA, said: “Crime and anti-social behaviour stoke a negative perception of public transport far out of proportion to the reality.

“However where it does occur it needs to be tackled, and I warmly welcome the work of National Express Coventry and West Midlands Police in doing so here.”

Transport Focus’ bus passenger survey data shows that 80% of passengers said they are satisfied with safety on National Express buses in Coventry. That figure has not dropped below 80% in four years.

Bus passengers can use the Safer Travel Partnership’s See Something, Say Something service to report any anti-social behaviour on National Express Coventry buses.

The reports help to build intelligence data which assists Safer Travel officers with pinpointing any particular hotspots to target.

See Something Say Something provides the travelling public with a discreet way to report nuisance and anti-social behaviour on the bus network.

Passengers can text 'bus' then details of the anti-social behaviour including time, date, location and route number to 83010.

Alternatively passengers can download the free 'See Something, Say Something' phone app, or by report incidents via the new Safer Travel website www.safertravel.info.

The officers use a variety of tactics, including targeted patrols based on known hot-spots and tip offs from the public; such as 'gateways' (high profile checks of all buses as they pass a particular location) on main roads into city centres, and travelling undercover.

The team also use mobile 4G CCTV cameras and remote monitoring of cameras.