The Partnerships Anti-Social Behaviour Team run a Restorative Justice scheme to tackle anti-social behaviour on the public transport network across the West Midlands. This includes all aspects of the transport infrastructure such as shelters, stops, stations and public transport itself.  The scheme works with young people aged between 10 to 18 years old who have been involved in incidents of nuisance or anti-social behaviour who do not have a previous offense history. The young people will come face to face with the victims of their actions and be made aware that their actions have consequences. The young people are then also made to repair any damage such as cleaning graffiti off a bus or cleaning a TfWM owned bus station.

The scheme began as a pilot in 2014 and now with funding from the Office of the Police and Crime Commissioner has continued to expand and build on some great results. Restorative justice interventions have been known to reduce reoffending by as much as 27% and therefore can be a very effective way of deterring repeat behaviour. It is also cost effective – for every £1 spent on restorative justice the criminal justice system is estimated to save £9.

Out of the 38 young people the team have worked with since August 2015 to July 2016none have reoffended on public transport and only one has reoffended again. This demonstrates that the team are working with the right individuals and the methods of restorative justice coupled with the physical reparation sessions is proving effective in demonstrating that their behaviour was not acceptable.

The young people involved have also thrown themselves into being part of the scheme. The team have regularly received gratitude from the young people and their families for taking this approach. One young person applied to National Express for work experience as they found the work so rewarding. Another even voluntarily offered to come back the week after to continue cleaning buses in their own time. Examples like this show that working with young people, engaging with them, not immediately criminalising their actions is important in rehabilitating them and preventing them from going down the ‘wrong’ path. 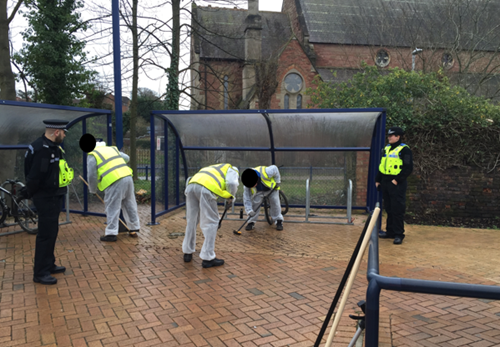