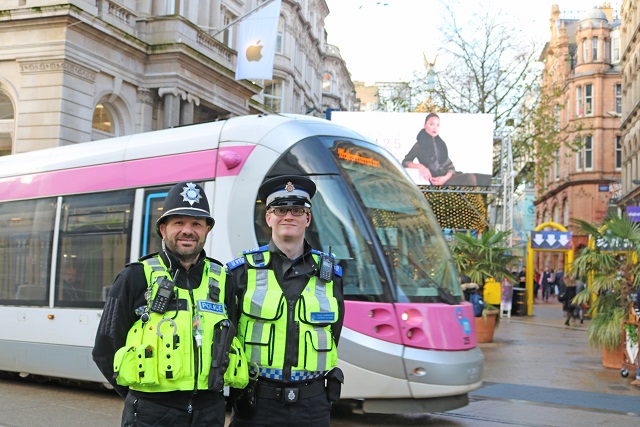 With only days until Christmas, extra police are patrolling the public transport network to welcome millions of shoppers into Birmingham city centre for the city’s famous German market.

High-visibility patrols on the city’s bus, train and tram network under Operation Snow will look to build upon the success of last year’s operation.

During this time, offences on the bus network in Birmingham City Centre were down 57% compared to the previous year. In the 43 days of the operation, there were only 10 bus offences in the city centre.

Last year saw an unprecedented increase in passenger footfall at New Street, with nearly 6m passengers using the station. That figure is expected to increase this year.

Officers from the Safer Travel Partnership will be patrolling city centre services and stations at peak times to deter any anti-social behaviour and reassure passengers.

Inspector Rachel Crump, policing lead for the Safer Travel Partnership, said: “This event brings millions of people to Birmingham and our job is to make sure people can travel safely to and from the markets. Results show our approach to protecting passengers is working.

“As we prepare to welcome people to Birmingham, we’d like to remind people to keep an eye on their belongings, not only on the lead up to Christmas, but after Christmas too as there will be a lot of people travelling with new gadgets and accessories. We encourage passengers to get these items marked and registered with immobilise (https://www.immobilise.com/)

“We also remind people not to drink too much and to make sure they plan their journeys home so we can make it a safe and peaceful Christmas for all.”

Tom Stables, managing director of National Express West Midlands, said: "Year upon year the Safer Travel Partnership's Operation Snow is a great success and I am very pleased to see it back again.

“Thousands more passengers have caught the bus into Birmingham city centre since the Christmas market opened - it seems people are making the wise decision to enjoy themselves and let us be their designated driver."

The partnership, the first of its type in the country, has access to more than 1,500 CCTV cameras located at bus, rail and Metro stations, park and ride sites, bus routes and in bus shelters, as well as a 24-hour dedicated control centre to spot and respond to incidents on the public transport network.